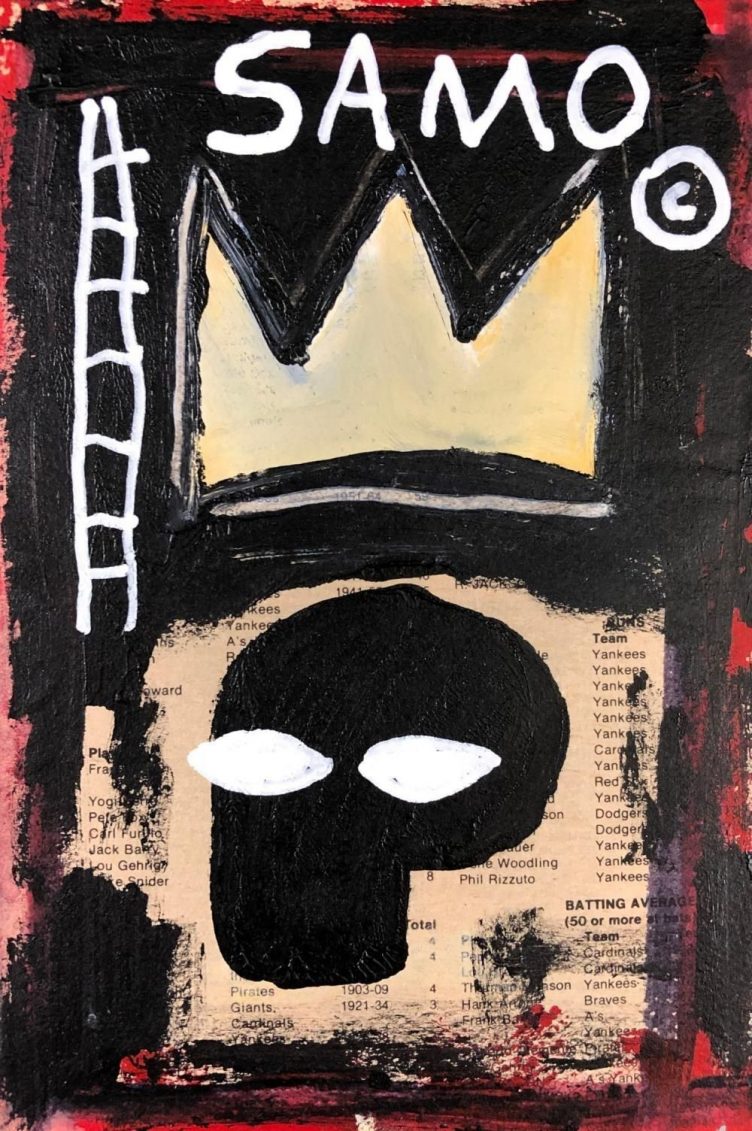 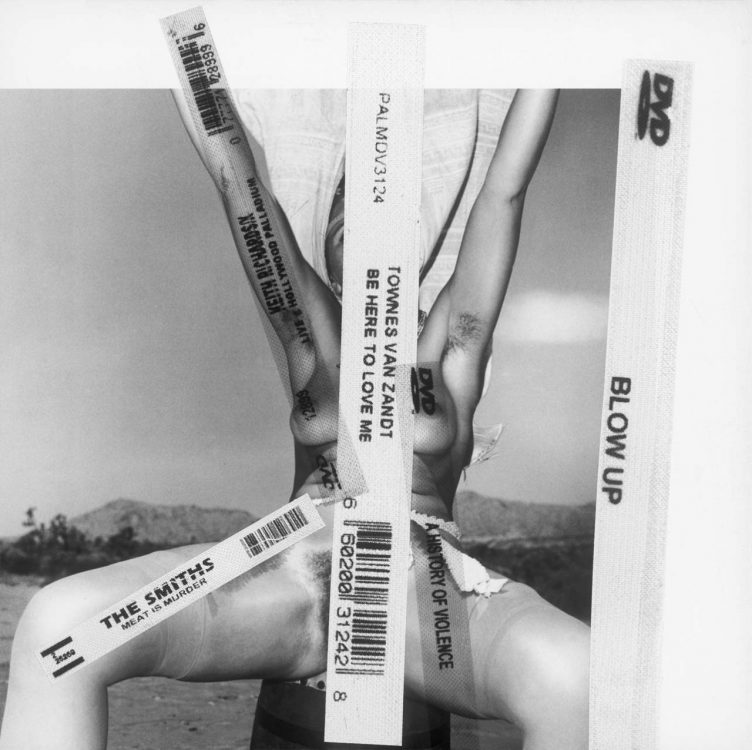 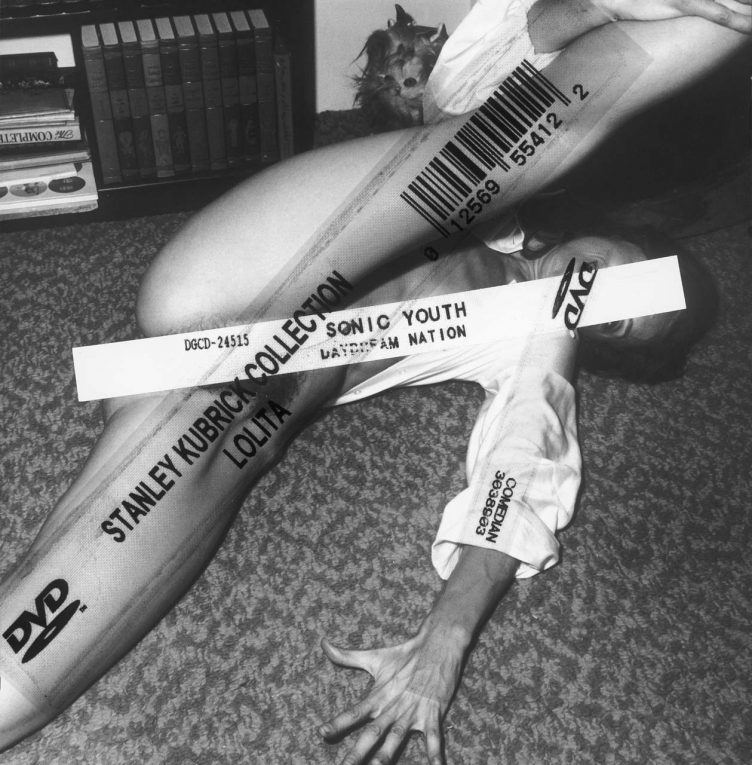 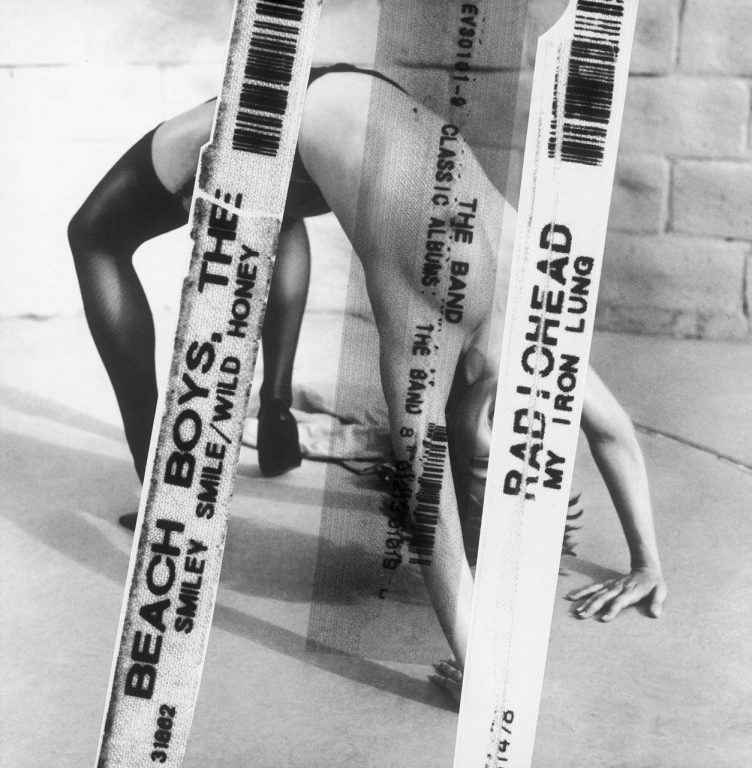 Richard Prince (b. 1949, Panama Canal Zone) emerged in the 1970s as one of the leading exponents of The Pictures Generation – a group of American artists working across photography, film, video and performance to critique mass consumerism and media culture. Renowned for his use of appropriation, Prince has employed various media to cite and subtly parody the visual and verbal clichés of American popular culture throughout his career – whether in the ‘Cowboys’ series, in which he ‘re-photographed’ the mythic cowboy imagery of Marlboro adverts, or in his celebrated ‘Nurse’ paintings: painted portraits of nurses based on the covers of popular pulp fiction novels, which proliferated households and newsstands in the early 20th Century. Through these various mechanisms, Prince exposes and critiques underlying ideological and cultural assumptions, holding up a mirror to American society, whilst simultaneously defining – and progressively redefining – the ever-expanding possibilities for appropriation in art. 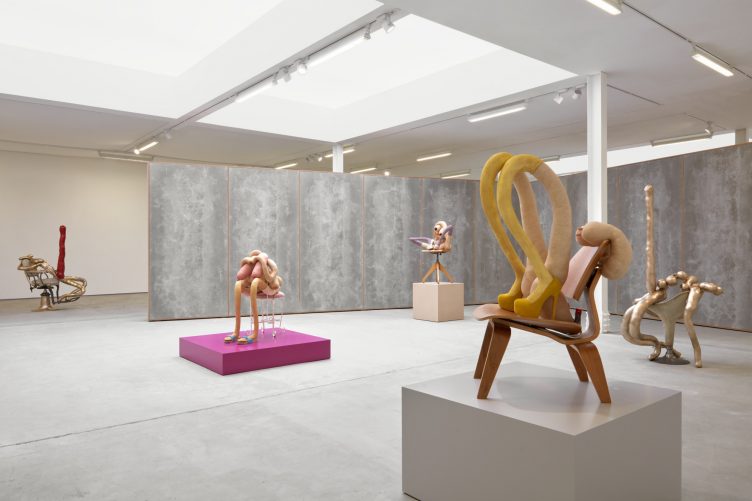 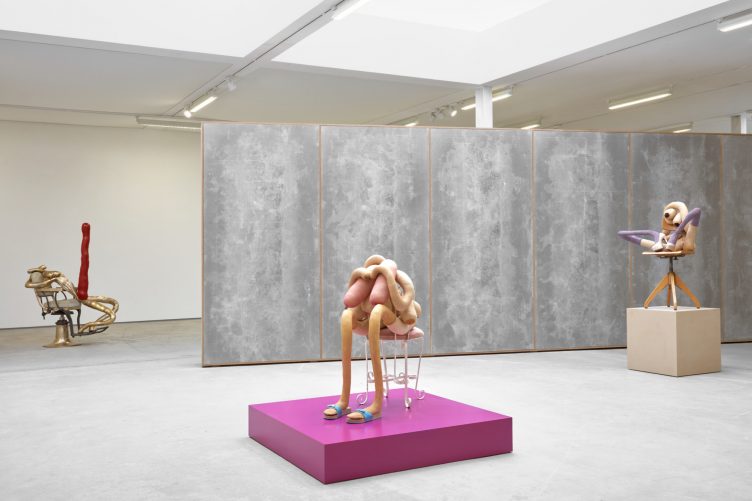 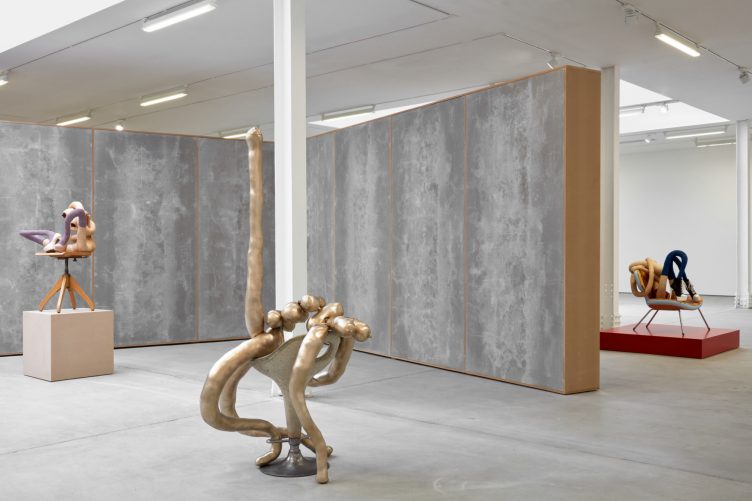 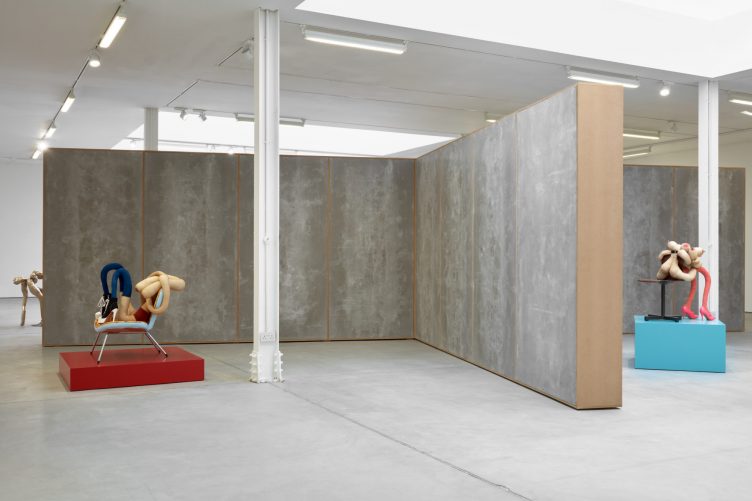 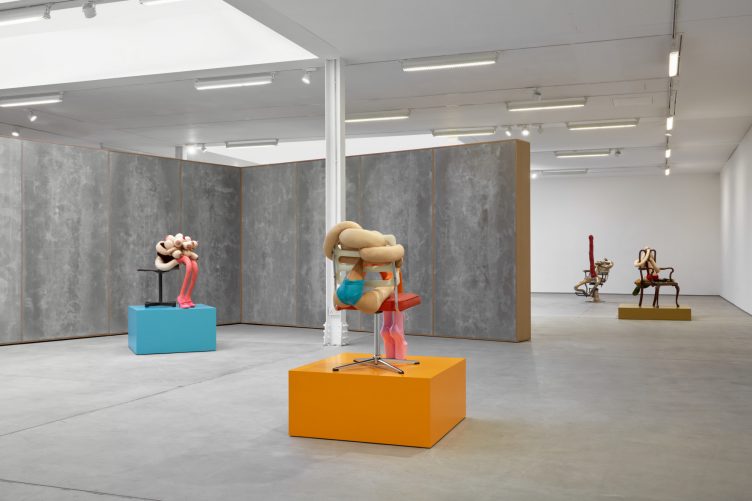 The exhibition consists of several sculptures made from stuffed tights and found objects, alongside an equal number of works in bronze and concrete. First conceived in 1997, Lucas’s Bunny sculptures evoke female nudes reclining on chairs in states of abandon and vulnerability. Employing the same everyday materials, the soft sculptures in HONEY PIE develop this formula through anatomical contortions, flamboyant footwear and chairs of eclectic shape and size. Bright colours applied to the figures’ limbs give them the appearance of a surrealist chorus line, at once exotic and comedic. Lucas has elevated the works on a series of plinths that reinforce their individualism, resetting the balance of power between sculpture and viewer.

Lucas’s soft sculptures are mirrored in five bronze and concrete works. Employing the same figure-chair composition, these stand in striking contrast to the fleshiness and bold colour of the soft figures – as if animate bodies have transmuted into statues or icons. Cast from soft prototypes, the hard sculptures consist of polished bronze anatomies – extruded, tubular forms with high-gloss surfaces – each posed on top of a chair rendered in concrete and metal. “They’ve got more of a ghostly quality – like something left over from another age,” Lucas has stated. “It’s a mixture of the hard and the soft, and the colourful and the austere.”

Lucas has arranged the sculptures within a cruciform structure of concrete and MDF that splits the gallery into quadrants. In their style of presentation as much as their rhyming forms, the works look back to earlier shows such as Bunny Gets Snookered at Sadie Coles HQ in 1997 (where the Bunnies were scattered around a snooker table) or NUDS in 2009, where she first began to use plinths in the form of breeze block stacks. In the new show, plinths in various shades of yellow compound the painterly aspect of the sculptures. In contrast to the literal debasement of the original Bunnies (most of which were placed on the floor), the plinths raise the works to eye level or higher, amplifying the swagger and exuberance of Lucas’s cast of characters.

These attributes are reflected in the works’ titles. DORA LALALA resembles a contortionist winding her legs into a bow; SUGAR consists of a bouquet of breasts on nimble pink legs. The chairs and shoes are themselves multifarious in design and import – from the scrolling campery of an ironwork seat to the hyperbolic femininity of platform boots. At the same time, Lucas’s soft and hard muses continue to channel themes that have defined her work from the beginning – whether the anthropomorphic charge of found objects, the objectification of the female nude, or the elusive line between comedy and abjection.

The exhibition follows Lucas’s first retrospective in China, at the Red Brick Art Museum, Beijing, in 2019, and her first US retrospective at the New Museum, New York, in 2018 (Au Naturel, curated by Massimiliano Gioni and Margot Norton), which travelled to the Hammer Museum, Los Angeles in 2019. A concurrent presentation will be on view at Gladstone Gallery, New York, opening 06 March 2020. 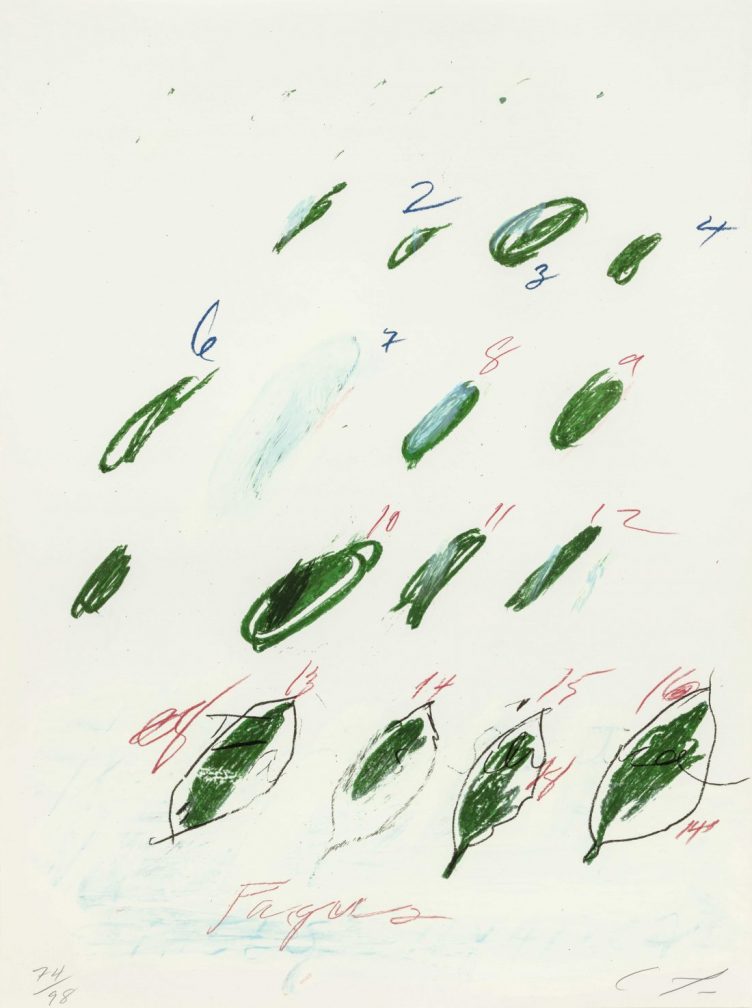 Twombly’s portfolios directly reference Roman author and commander Pliny the Elder’s Natural History (Naturalis Historia), a theoretical text on the natural world published in 77-79 AD. Positioning nature as a divine entity that has an interdisciplinary link to art, the encyclopaedic book was one of the most impressive works to survive the Roman Empire.

Split into two series, Natural History Part I: Mushrooms (1974) is formed of ten prints whilst Natural History Part II: Some Trees of Italy (1975/76) is formed of eight. Using mushrooms and trees as motifs respectively throughout, both series’ feature contrasting collaged material with the artist’s signature, expressive hand. Employing a mixed media technique, each print varies in its use of lithographs and grano-lithographs, collotype on Fabriano paper, semi-transparent tracing paper, photochrome with collage, and Twombly’s own drawing. Often combining botanical illustrations and scientific text with his own artistic and instinctive gestures, Twombly merges logical thought with creative endeavour. Sequential in nature, the exhibition presents the complete two series’ as the artist intended, therefore ensuring the narrative of each is not disrupted. 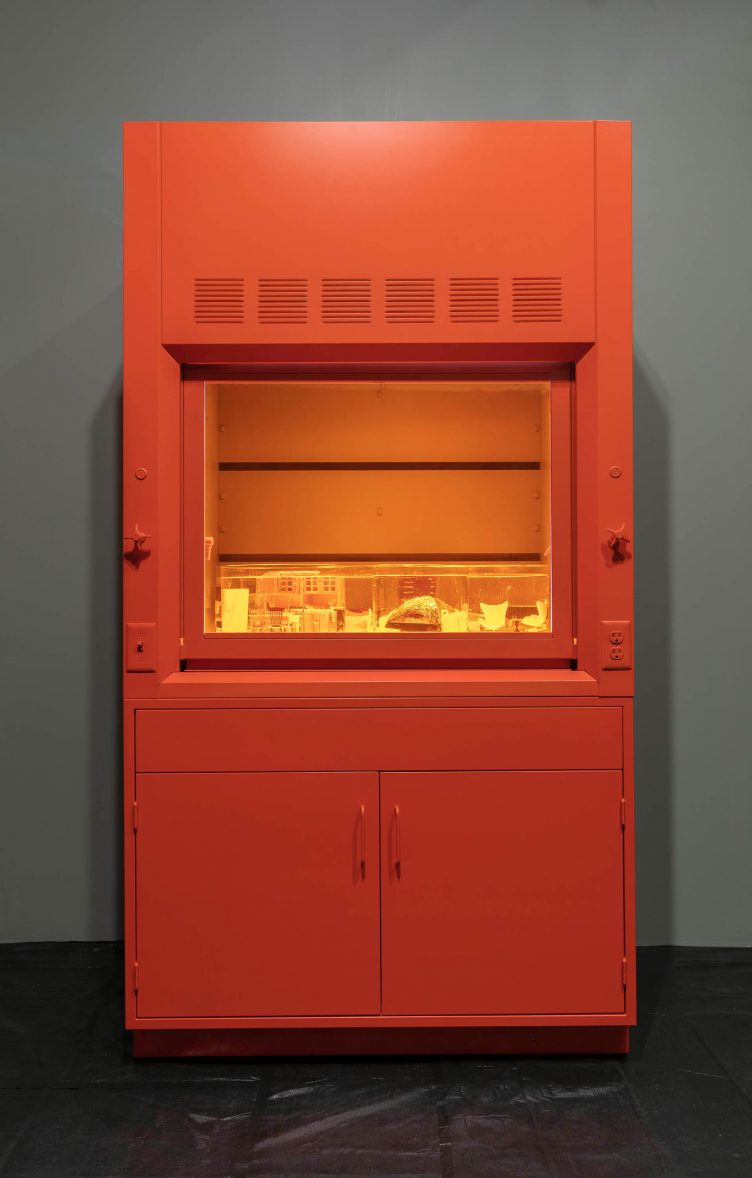