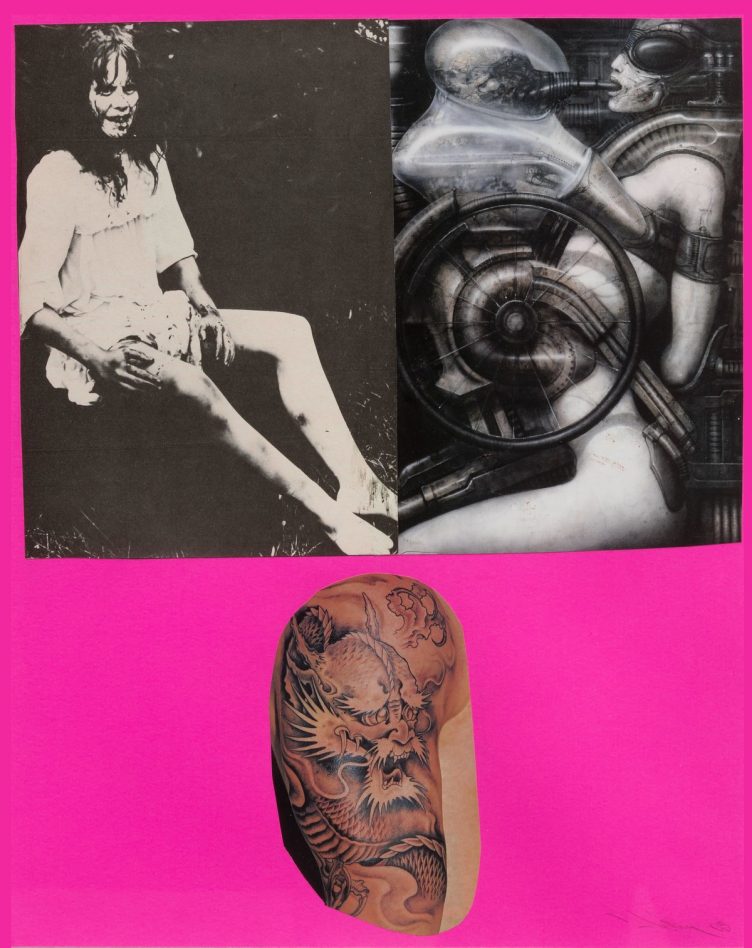 Spazio Maiocchi presents two new exhibitions curated by KALEIDOSCOPE which bring together one of today’s most acclaimed artists, Sterling Ruby (American/Dutch, b. 1972, lives and works in Los Angeles), with one of his creative heroes, legendary Swiss artist and concept designer H.R. Giger (1940–2014).

In the courtyard of Spazio Maiocchi, the visitor is greeted by Ruby’s billboard commission featuring STRIP STRIP (RB) (2016–19)—an artwork from the artist’s “poetic posters” series which reflects his sculptural concerns on the public space, expanding it through the use of poetic language.

In the main gallery, the centerpiece of the exhibition is the European premiere of Ruby’s STATE (2019), a single-channel video projection that the artist has spent the past five years researching and producing, working with a videographer and helicopter pilot to film aerial views of the 35 adult state prisons of the California Department of Corrections and Rehabilitation (CDCR).

In the video, a repetitive, structural rhythm is created as the scenes cut back and forth between the landscapes and the sites of the prison grounds, accompanied by a drum track which Ruby himself has composed and performed.

Outside of the video room, leading the viewer onto the next gallery, is Ruby’s HRG Suite (2006), an assemblage of 9 unique collages on paper referencing the sci-fi, dystopian imagery of H.R. Giger and bringing an uncommon, visceral perspective to the oeuvre of the Swiss artist.

Unfolding throughout the space, a selection of works including furniture, prints, paintings and sculptures displays the staggering variety of media employed by Giger across his practice, resulting into a non-linear retrospective exhibition with the immersive quality of a wunderkammer.

As told to Hans Ulrich Obrist and Patrick Frey in the cover story of KALEIDOSCOPE’s most recent issue, the work of the late Swiss artist is a journey from abstract to figurative, from organic to apparatus—culminating in his concept design for Alien, which catapulted to fame his daunting vision of death and futurism.

On the occasion of the opening night, drone metal guitarist and composer Mick Barr aka Ocrilim will perform a monolithic live act of stratified sounds and brutalist abstraction.