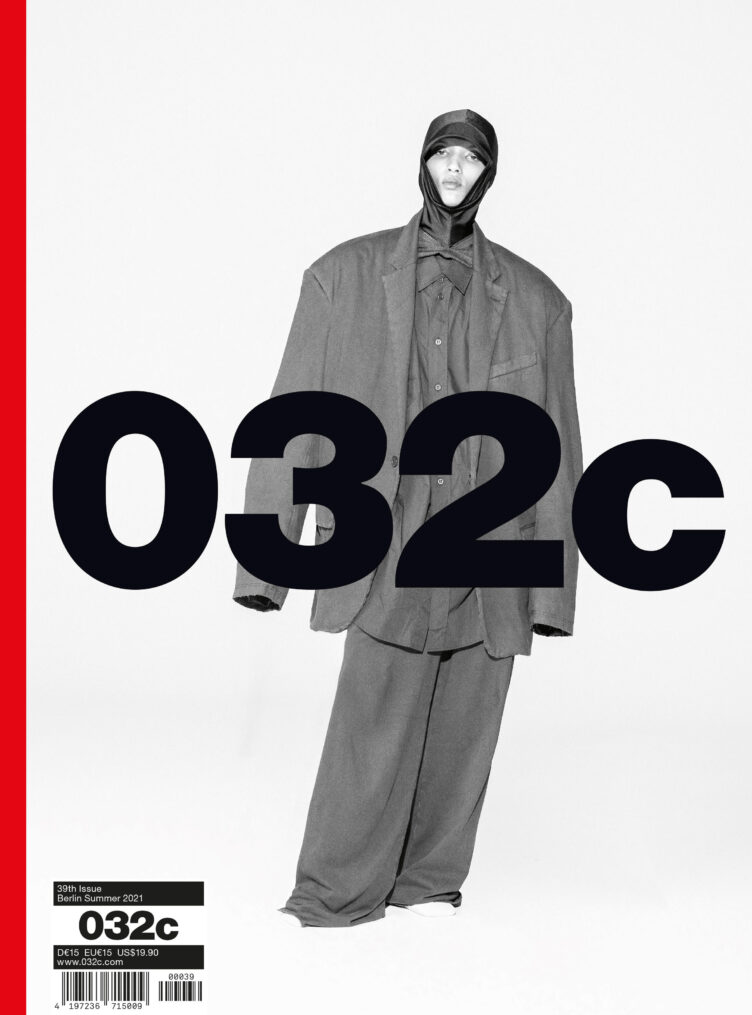 “It seemed like eternal life was within reach… but at what cost, and by whose work?”

The Office of Metropolitan Architecture’s third cover dossier for 032c considers THE HOSPITAL OF THE FUTURE: the world’s next biggest design problem. As new attitudes and technologies emerge alongside novel viruses, the research team behind this speculative report, introduced by OMA partner REINIER DE GRAAF, asks: What could the hospital be, tomorrow?

TROIS FEMMES PUISSANTES: Pop princess DUA LIPA spellbinds in High London Goth for Jordan Hemingway’s analog lens. Poet, photographer, songstress, and star SHYGIRL gets comfortable in her own lane, and ERIC JOHNSON meets her there. K-pop star turned solo rap queen CL proves there is Alpha status after the girl group. Historian KARL SCHLÖGEL tracks the scent of totalitarianism, following the perfume of imperial Europe from COCO CHANEL to the Kremlin. A-Cold-Wall* designer SAMUEL ROSS talks W.E.B. Du Bois, streetwear, and the semiotics of working-class England. With an international footprint in contemporary art, gallerists MONIKA SPRÜTH and PHILOMENE MAGERS provide a case study in 21st-century globalism. WU TSANG, BOYCHILD, JOSH JOHNSON, and ASMA MAROOF represent MOVED BY THE MOTION: a “roving band” that grew out of LA’s queer party scene, now settled in a theater in Zürich. Pasolini, Mussolini, VILLA FELTRINELLI: in an interview with the Grand Hotel’s MARKUS ODERMATT, SVEN MICHAELSEN explores the fraught and fabulous history of a luxury oasis on Lake Garda. And, at last, DANKO and ANA STEINER return their fashion romance to the pages of 032c, bringing supermodel GEORGIA PALMER back from the depths with them.

PLUS – Marcel Proust went looking for it, but we found it: Société de 032c presents LE TEMPS PERDU. Editor Felix Burrichter celebrates PIN-UP’s quinceañera; producer Black Noi$e gets silly at home in Detroit; DJ Amelie Lens eyes new talent; and shapewear entrepreneur Emma Grede trades glass ceilings for glass walls. We end the issue, as we always do, with our favorite books of the season in a new installment of BERLIN REVIEW. 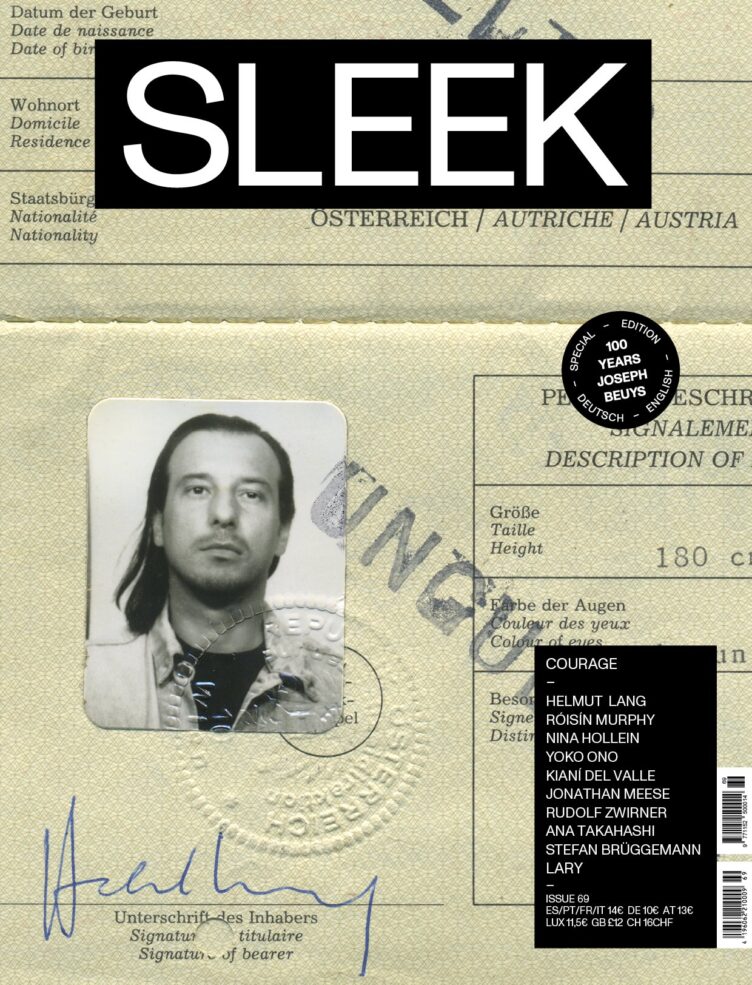 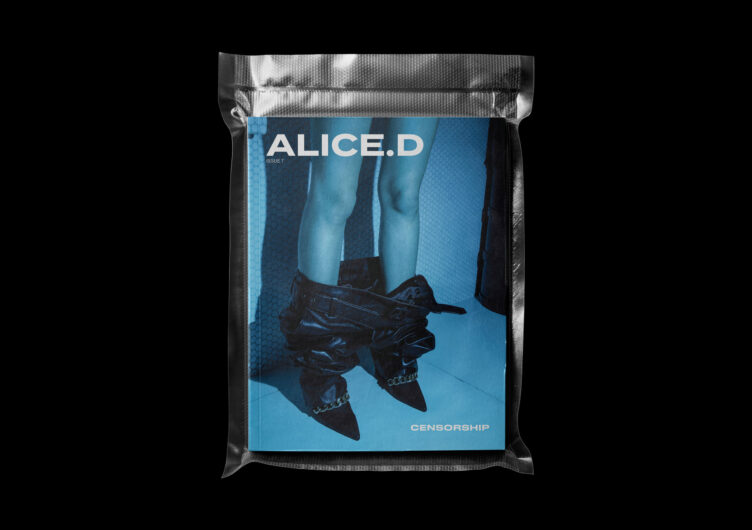 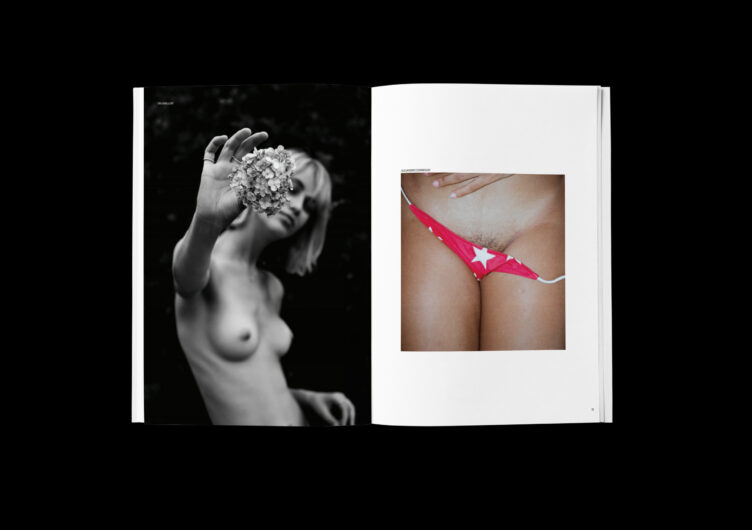 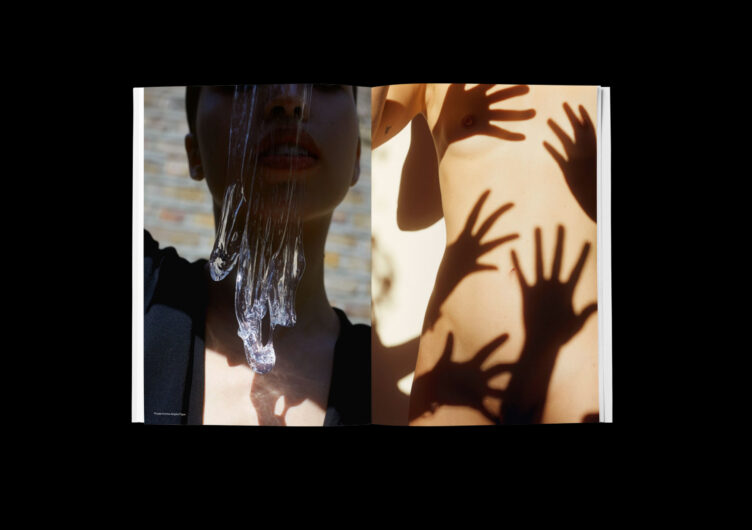 “Your Censorship Has Been Deleted.”

We have removed your censorship as it goes against our community standards. If you violate our guidelines again, your influence may be restricted. 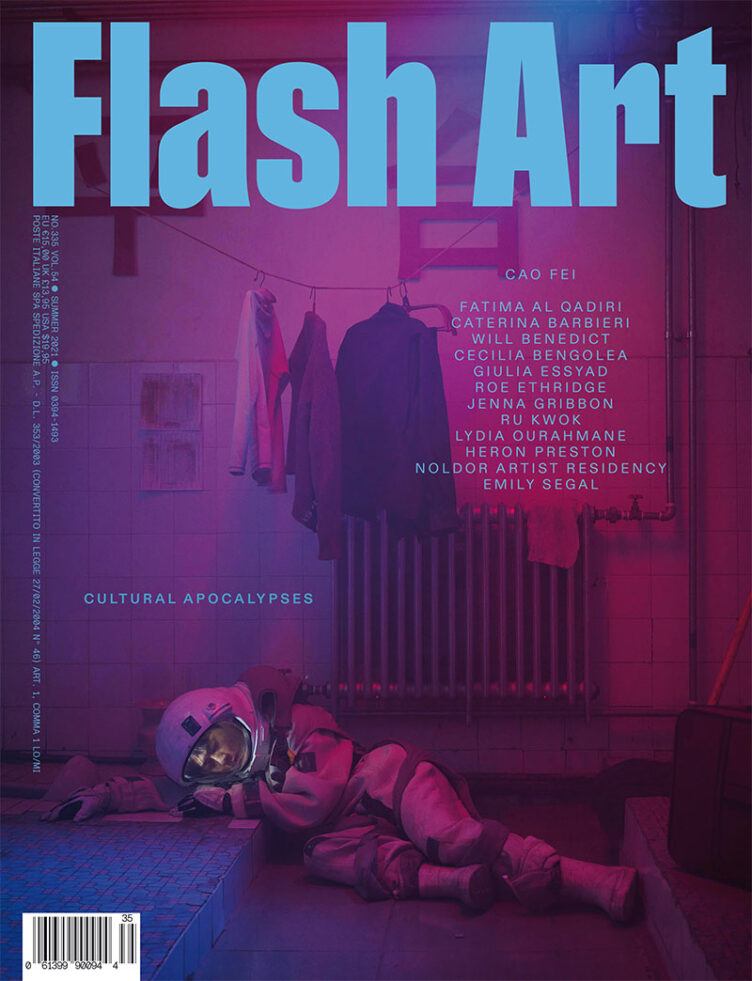 In this issue, writer and philosopher Federico Campagna, in a surprisingly conversation with Andrea Bellini about the end of the world, explains that a world is a “‘likely story’ about reality” and that “after a while, each cosmological narration exhausts its narrative cycle and it comes to an end.” According to Campagna, each of us go through several “ends of the world.” Spanning from these reflections we titled the issue Cultural Apocalypses dedicating our cover story to Cao Fei, one of the most farsighted artists on the international scene which discusses here her explorations of worlds both real and virtual with Daniel Birnbaum, Hou Hanru, Hans Ulrich Obrist, and Philip Tinari. 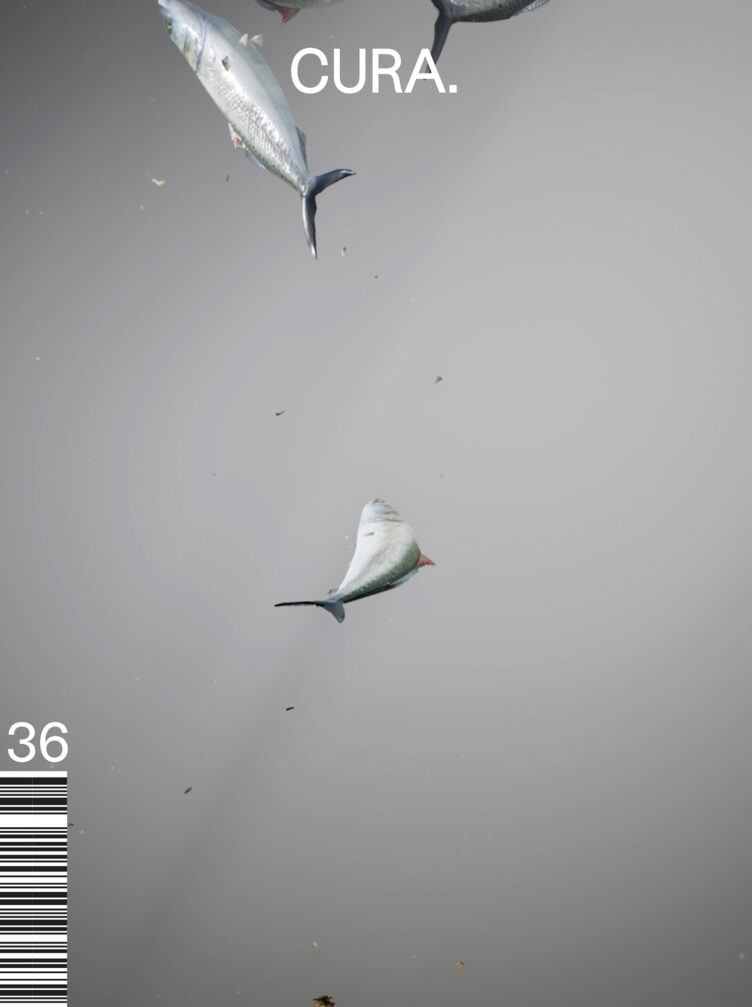 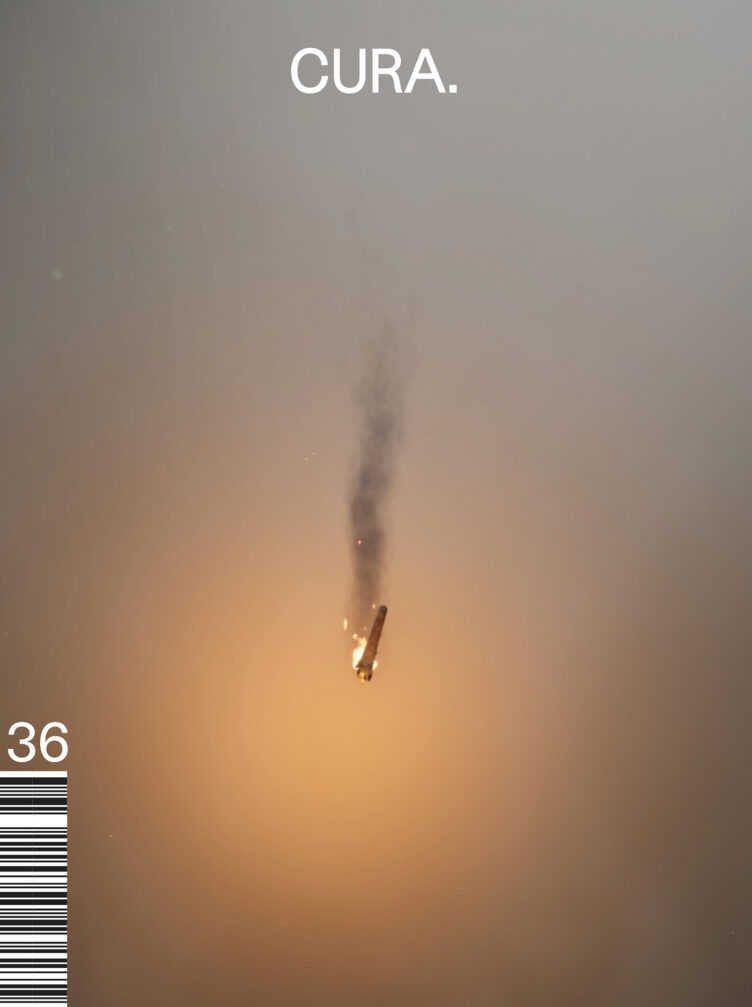 The power of art to anticipate future social and technological developments inspired the new issue of CURA. 36 to investigate the notion of futurity through the work of some of the most visionary and promising artists of the contemporary landscape.

“In a period in which the material became a threat or risk of contamination due to the Covid-19 pandemic, the immaterial, the surrogate space where we accept other materialities, has become increasingly centralized” Gareth Damian Martin argues in the essay devoted to the work of Ed Atkins, who is featured on the double cover of this issue. However, as Lumi Tan writes in her contribution on the artist, “the visualization of alienation and confinement that Ed Atkins has put forth over the past decade feels now queasily familiar.” Moreover, in a dialogue with writer Vivian Rycroft, Atkins explores some of the key themes that inform his upcoming solo show at the New Museum in New York, in which the relationship with the self and the limits of one’s own representation are widely addressed.

In a progressive process of dematerialization of reality, the physical world gives space to the prefiguration of a virtual world that decodes new conditions, “in order to survive the climate, extinction and social crises of our time” (…); “We tend to think of ourselves as separate from the rest of the world, entities that inhabit and perceive a reality defined by objects in three-dimensional space” writes K Allado-McDowell in the book for Ignota Books written in collaboration with OpenAI’s GPT-3 language model, a neural net that generates text sequences.

“It turns out that learning how to see the world around us is pretty hard to do,” claims Trevon Paglen, and on the essay on his work Emma Enderby continues, “If the future always flies in under the radar at a moment when technology is quickening past humanity, Paglen contemplates this future and the need to expose certainties so that we might gauge that new reality and ask if it could be different.” On the other hand, “if one accepts humans as one among many organisms, then culture, economy, and technology are part of the extended phenotype of homo sapiens, contiguous with the rest of nature (Timur Si-Qin with Mostafa Heddaya), and “if matter constantly converses and changes, there are no total opposites, so in a way metaphor is the only way for us humans to understand or grasp the world.” (Guan Xiao with Sarah Johanna Theurer). “The future is already here—it’s just not evenly distributed” argues Yuri Pattinson in conversation with Bart Van Der Heide.