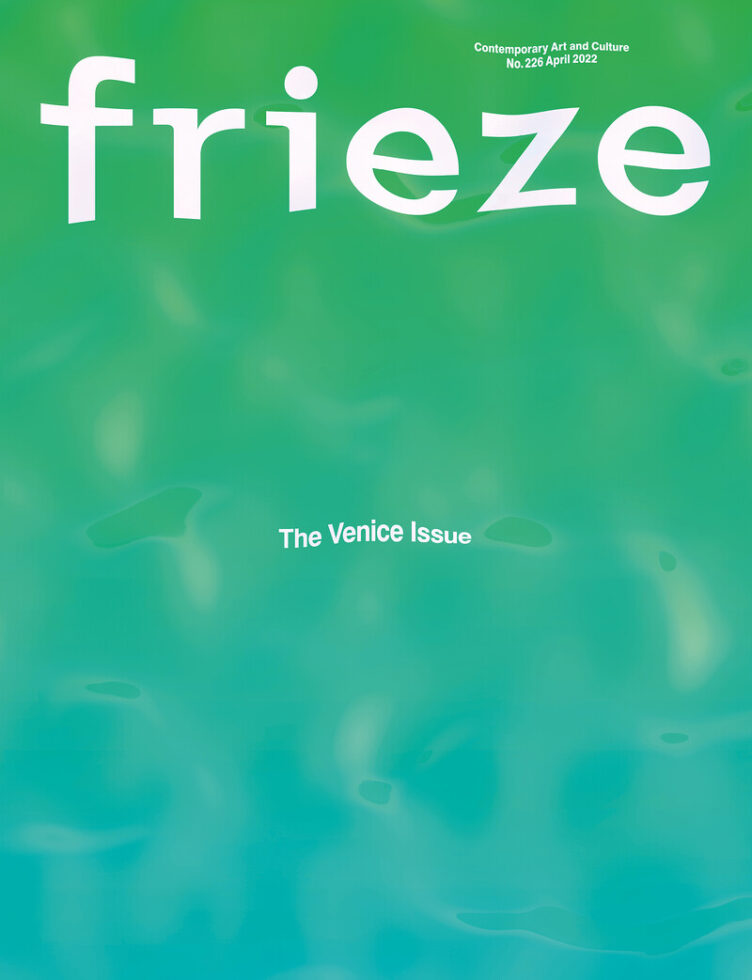 “Seemingly overnight, Venice was transformed into a laboratory for the future.” —Jennifer Higgie

The April issue of frieze is dedicated to the Venice Biennale. Fernanda Brenner, Thea Havlin, Eric Otieno Sumba and Skye Arundhati Thomas each select an artist to watch at this year’s Biennale: Dineo Seshee Bopape, Marguerite Humeau, Shubigi Rao and Luiz Roque. Plus, Jennifer Higgie dives into the age-old discussion of Venice’s national pavilion system, calling on 30 years’ worth of experience attending the Biennale.

Dossier: Four Artists to Watch 2022
“The personal, historical and spiritual meet the currents of the ocean.” While the Venice Biennale is often known for the established names who showcase at the national pavilions, it also hosts numerous young and emerging artists. In four short essays, writers profile Dineo Seshee Bopape, Giulia Cenci, Shubigi Rao, Luiz Roque from this year’s edition

Essay: States in Progress
“Showcasing ‘the best’ is a tricky proposition that begs bigger questions around the function of art.” With the spotlight at the Venice Biennale falling all-too-often on the 30 national pavilions in the Giardini, while other countries are required to rent off-site venues, writer Jennifer Higgie asks whether this 19th-century format still makes sense.

Also featuring
Adam Szymczyk profiles Maria Eichhorn, who will represent Germany at this year’s Biennale. in “1,500 words,” Avram Finkelstein, a former member of the activist group Gran Fury, remembers the fractions and disputes that led to their notorious 1990 Biennale show “Pope Piece”. And Roisin Tapponi speaks to Zineb Sedira ahead of her exhibition at the French pavilion.

Columns: Come Together
The issue opens with a series of columns on the theme of coming together: Imani Robinson profiles Sonia Boyce, the first Black female artist to represent Great Britain in Venice; Linda Yablonsky pens a satirical primer to Biennale, drawing on her years of experience attending exhibitions and parties; Terence Trouillot speaks to the member of Wochenklausur about their 1999 Kosovo Language School; Francesco Tenaglia explores the role of performance at the event. Plus, Barbara Casavecchia talks to the Biennale College Art students – Simnikiwe Buhlungu, Ambra Castagnetti, Andro Eradze and Kudzanai-Violet Hwami – about their experiences as the programme’s first cohort.

Plus, Elvia Wilk responds to a single work by Francis Alÿs and the latest iteration of our Lonely Arts column. And, finally, we re-instate a popular frieze format Going Up, Going Down, charting what’s hot and what’s not in the global art world. 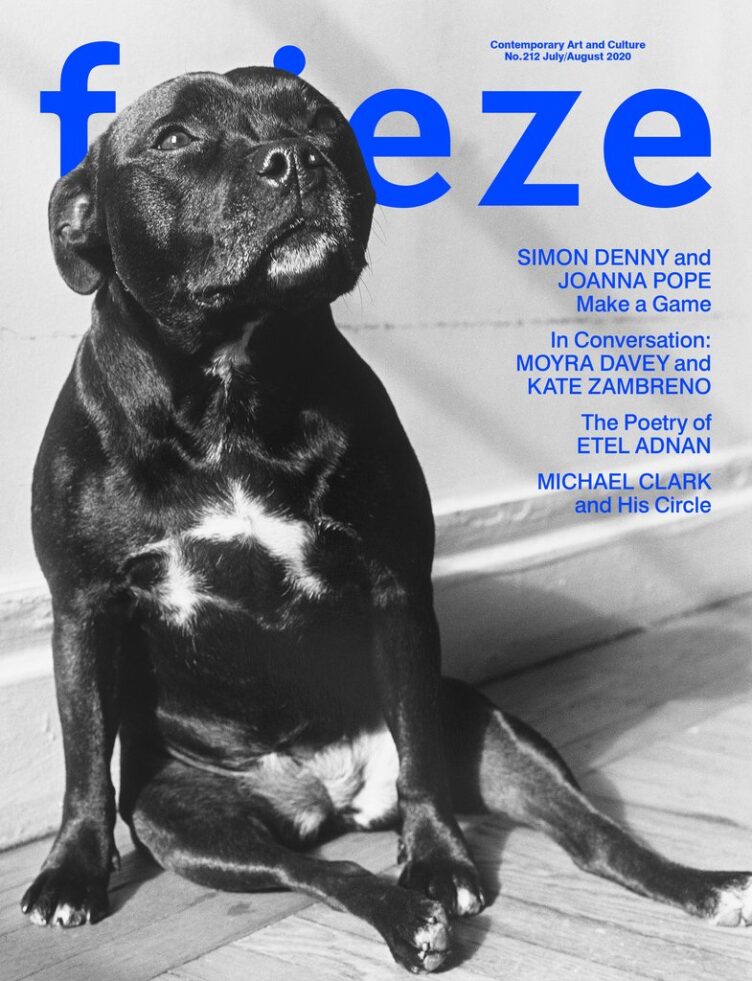 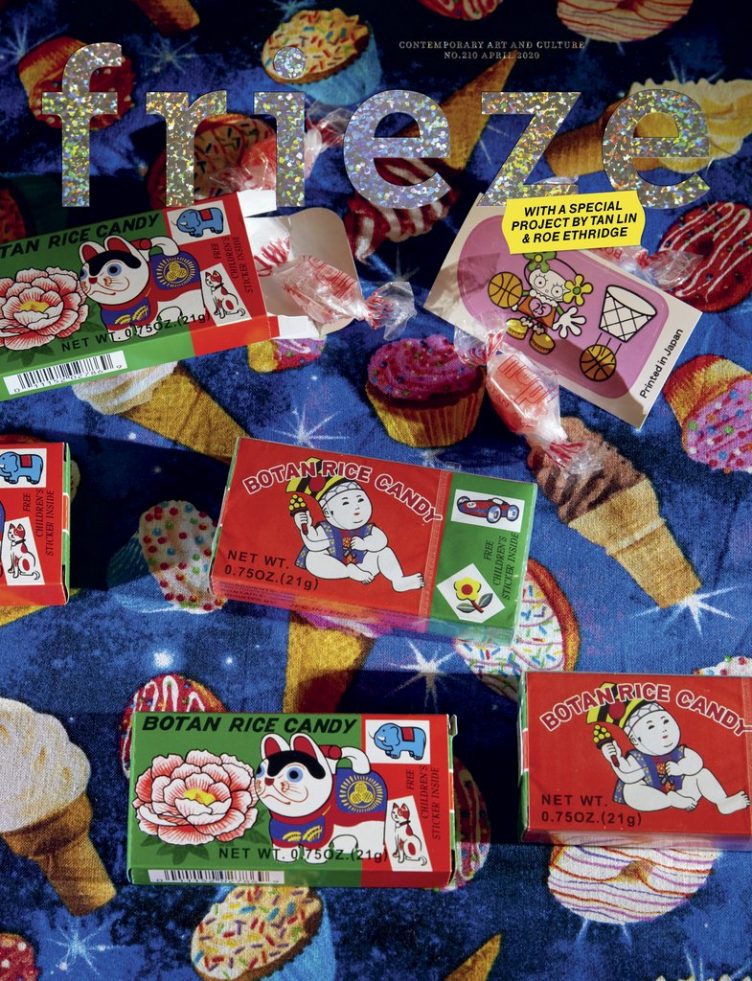 In the April issue of frieze, Lucy Ives takes a close look at artists who made their homes into all-encompassing works of art; Steven Zultanski finds poetry in the perversity of cult video artist Steve Reinke; Tan Lin remembers the Chinese candies that framed his childhood in Ohio, with original photography by Roe Ethridge; Robert Glück revisits the dream journals left by his late partner, the painter Ed Aulerich-Sugai; Juliet Jacques talks to McKenzie Wark about new approaches to writing about trans identity; and artist and composer Tarek Atoui answers our questionnaire.

Plus, 26 reviews from around the world, including Tschabalala Self at the Institute of Contemporary Art, Boston, and Anna Bella Geiger at the Museu de Arte de São Paulo. 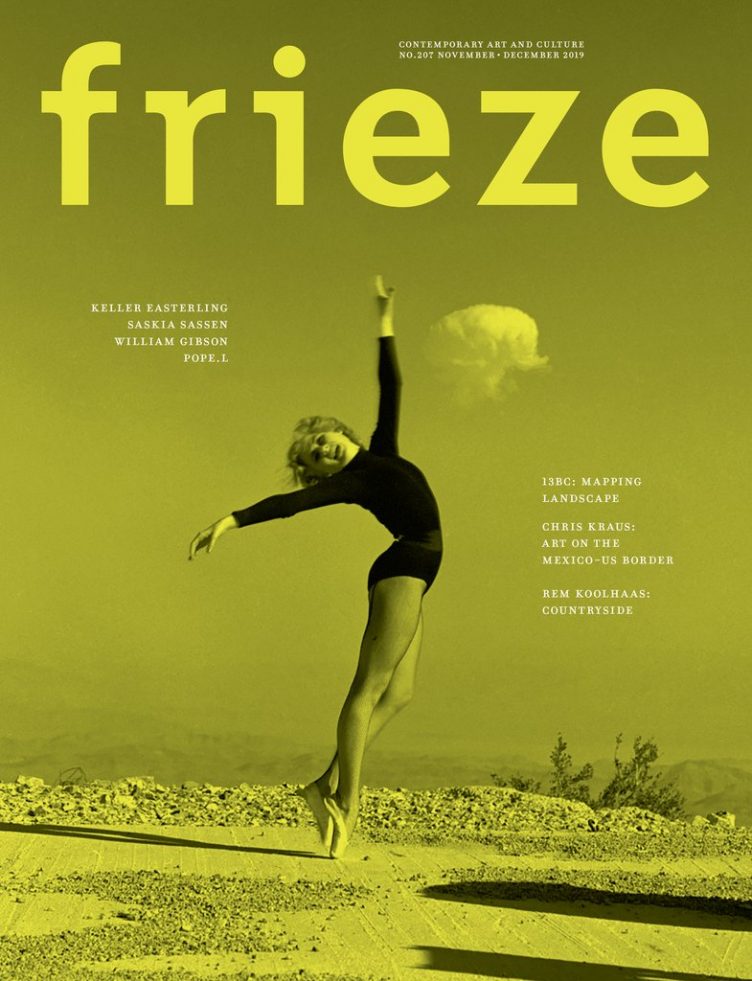 “The more the activist agitates within [familiar cultural defaults], the more the noose tightens.” – Keller Easterling

The November / December issue of frieze focuses on infrastructural shifts in the arts, the environment and in activism. What is the artistic landscape like outside established global capitals? How are artists representing our now-hotter, wetter world? How can museums recover after scandals, and what should activism achieve? Featuring Pope.L, Keller Easterling, Rem Koolhaas, Chris Kraus, Marlene McCarty, Saskia Sassen, Thirteen Black Cats (Vic Brooks, Lucy Raven and Evan Calder Williams) and more.

The View from Above
“13BC are interested in land exploitation, the legacies of past conflicts and the creative deconstruction of cinematic conventions.” Kaelen Wilson-Goldie profiles 13BC, a film collective engaged in changing how we see and map landscape. A still from their 2019 film, Straight Flush, set in the barracks of a decommissioned military facility in Utah, features on the cover of the issue.

Countryside
“I began to realize that, through an accumulation of discrete individual changes, the countryside was transforming more drastically than the city.” Architect Rem Koolhaas and AMO visualize the emergence of a “new sublime” in the world’s rural zones—a change “perhaps more exciting than anything we have seen since the birth of modernism in the early 20th century.”

Also featuring:
Chris Kraus convenes a roundtable on art-making on the Mexico-US border; urbanist Keller Easterling on activism in an age of polarization and information warfare; sociologist Saskia Sassen on cultural “invisibility” in an age of global displacement; Jessica Lynne on Pope.L, an artist whose often-provocative work—spanning public performance, teaching and traditional media—has never been more urgent; Jennifer Kabat visits Silo City in Buffalo, New York, where artist Marlene McCarty is planting a garden that draws on the area’s history at the crux of capitalism and modernism; and Max Andrews pens a case study on how right-wing politics can impact museums, looking to Spain’s trailblazing Institut Valencia d’Art Modern (IVAM).

Columns and Reviews:
Mike Pepi investigates the nefarious potential of privatized digital surveillance, focusing on the company Palantir, and its ties to the US’s Immigrations and Customs Enforcement (ICE); Timotheus Vermeulen reveals links between true-crime TV and Brexit; Susanne von Falkenhausen recalls cultural frontiers on either side of the Iron Curtain 30 years after the fall of the Berlin Wall; Jonathan P. Watts finds contemporary relevance in Jeremy Millar’s 1994 ICA exhibition The Institute of Cultural Anxiety; Skye Arundhati Thomas pens a call to action for the art world surrounding the Kashmir crisis; and Nicholas Mirzoeff asks—what can mass migration teach us about museums?

Plus, 22 reviews from around the world, including Vincent Fecteau at CCA Wattis Institute for Contemporary Arts, San Francisco, and Wael Shawky at Lisson Gallery, New York. 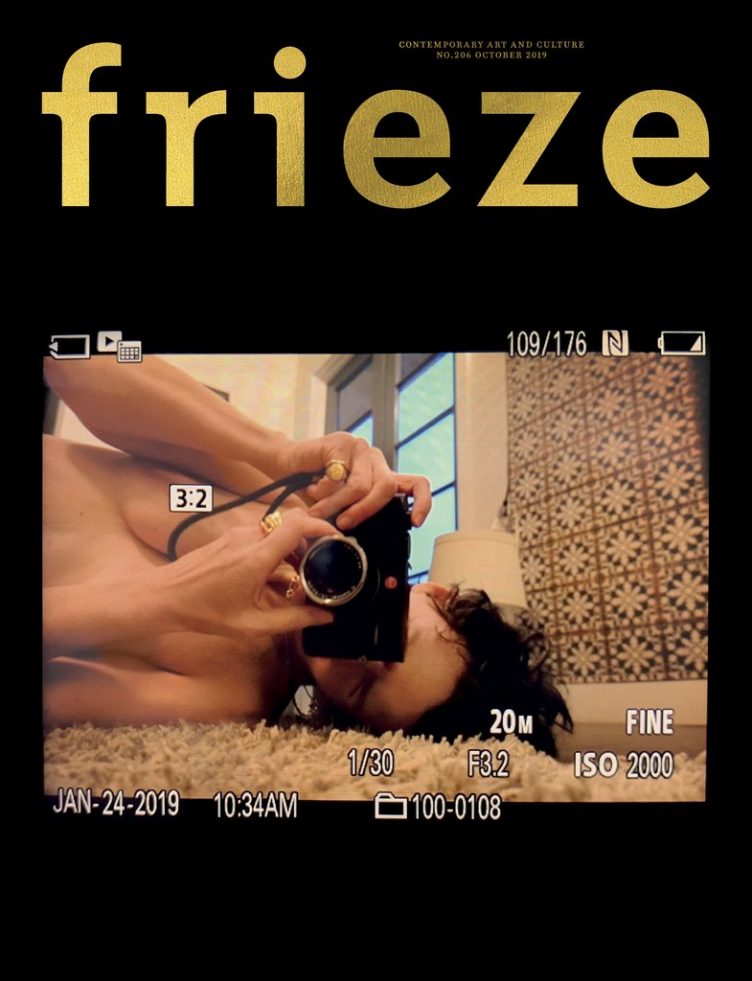 Also featuring: Hilton Als on domination, revenge and longing in the films of Kara Walker; Glasgow-based artist and filmmaker, Luke Fowler, on his formative experiences, from the BBC to Patrick Cowley; Jennifer Kabat getting jazzed by the candid prose of dance critic Jill Johnston; Collier Schorr learning to dance in a specially-commissioned visual essay; Sean O’Toole sparring with language through the writings of William Kentridge; and Hendrik Folkerts on Dale Harding’s potent reflections of Australia.

Plus, 35 reviews from around the world, including Paula Rego’s major retrospective at MK Gallery, Milton Keynes, and curator Susanne Pfeffer’s game-changing show, ‘Museum’, at the Museum für Moderne Kunst in Frankfurt. And answering our questionnaire is avant-garde polymath Meredith Monk, whose masterwork, Quarry: An Opera in Three Movements (1976) was restored and screened at Anthology Film Archives, New York, earlier this year. 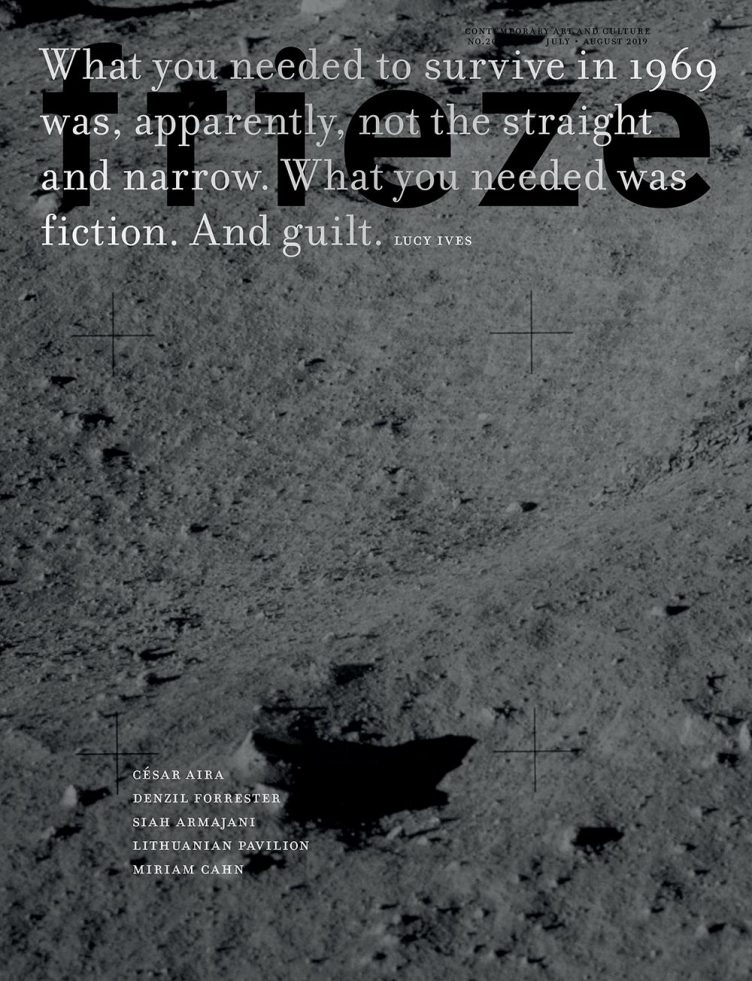 Three novelists delve into the past to unearth the present. Lucy Ives considers the 50th anniversary of the moon landing, ‘What you needed to survive in 1969 was, apparently, not the straight and narrow. What you needed was fiction. And guilt’; César Aira recalls his childhood in Coronel Pringles and his mother’s overbearing fixation on cultural refinement; and Heike Geißler pens a new work of autobiographical fiction that reflects on our exasperated age of news cycles, scandal and movement.

Plus, 32 reviews from around the world, including reports on two New York shows that chart Lincoln Kirstein’s legacy. In London, two exhibitions showcase Channa Horwitz and Emma Kunz’s play with reason and repetition, at the Lisson Gallery and Serpentine Galleries.